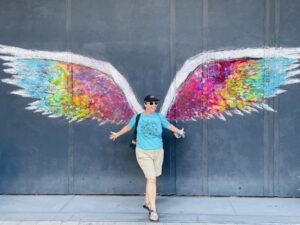 Last week, we celebrated the 20th National LGBTQ Health Awareness Week, which intends to promote mental health and trans health awareness for the LGBTQ community as well as professionals within and allies of the community. This year’s theme was “Live Out Loud,” encouraging everyone to speak openly about LGBTQ health and end the stigma through accessible, affirming, and inclusive healthcare services that allow everyone to fully live their truth. Now, that’s a message I can stand behind! Learn more about the National Coalition for LGBTQ Health.

I believe that everyone deserves access to life-changing healthcare services and life-saving interventions. I implore you to raise your voice and get involved! And yes, that is me showing my support as an ally. Kids who have allies have better outcomes.

Human Rights Campaign and researchers at the University of Connecticut found that:

HOW CAN YOU GET INVOLVED?

Getting support for the family and caregiver is critical to ensure the right solution and support is available for your loved one.

“#1 reason to involve caregivers in treatment: Improved outcomes for patients and caregivers across the lifespan.”~ Dr. Adele LaFrance